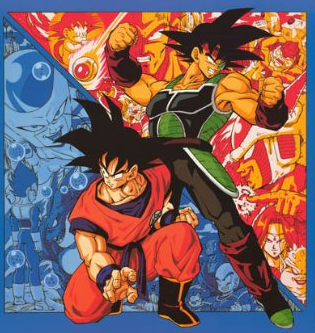 You Can't Fight Fate, but you can start a legacy.

Dragon Ball Z: Bardock – The Father of Goku (also known as Doragon Bōru Zetto: Tatta Hitori no Saishū Kessen ～Furīza ni Idonda Zetto Senshi Son Gokū no Chichi～; lit. "Dragon Ball Z: A Lonesome, Final Battle 'The Father of the Z Warrior Son Goku, who Challenged Freeza'") is the first Dragon Ball Z TV Special made by Toei Animation (the second being Dragon Ball Z: The History of Trunks), airing during the the Freeza Saga, as well as a prequel of the series as a whole.

The special is centered around the Origin Story of Bardock, a low-class Saiyan who is also the father of Kakarot (Goku) and Raditz as he discovers a plot where Freeza intends to destroy the entire Saiyan race via psychic powers given to him by an alien whose race he destroyed the night before. With his new powers, Bardock realizes the visions he receives are no illusion…

The special was popular enough that Akira Toriyama integrated him into the manga, making the Bardock Special canon in Dragon Ball Z Kai. A special called Dragon Ball – Episode of Bardock created in 2011, was made to serve as a What If? sequel, detailing Bardock's survival and eventually becoming a Super Saiyan. A special feature in the Jaco the Galactic Patrolman manga called Dragon Ball Minus essentially serves as a prequel to this special with several changes in the details, solidifying Jaco's Stealth Prequel status to the Dragon Ball story as a whole.

This work contains examples of:

While Bardock's efforts to prevent planet Vegeta's destruction by Freeza are in vein, he goes out with a smile knowing that Kakarrot (better known as Goku, will finish the job for him.

Alternative Title(s):Bardock The Father Of Goku

CC
Closed captions (CC) refer to subtitles in the available language with the addition of relevant non-dialogue information.

It first aired on October 17, 1990. Bridge Entertainment's title is The Father of Goku. Funimation dubbed it into English in 2000. It was the first Dragon Ball Z feature to be dubbed with Funimation's in house voice cast. The special was re-released in a remastered box set bundled with Dragon Ball Z: The History of Trunks in May 2008. Funimation released a remastered single version on September 15, 2009.

This special is the story of Bardock, a low-class Saiyan warrior. At the outset of the story, his son Kakarot, having just been born on Planet Vegeta, is being prepared to be sent to Earth in order to destroy all life on the planet. Meanwhile, Bardock and his crew are on an assignment to exterminate all the life forms of Planet Kanassa. After the planet is seemingly devoid of all other life, Bardock and crew rest up and celebrate their victory until one remaining warrior catches him off guard and decides to give himthe "gift" of seeing visions of the future. This gives him the ability to see the destruction of Planet Vegeta, and almost the entire Saiyan race along with it, at the hands of their master, Frieza. He also sees the salvation of the planet Earth through his son Kakarot.

This prediction becomes reality when Frieza decides to destroy the entire Saiyan race. Within Frieza's spaceship, Frieza is being briefed by his top two henchmen, Zarbon and Dodoria, in regards to the occurrences in their routine interplanetary galactic trade and conquering. Recent news reveals that the Saiyans' strength constantly grows after each battle. Zarbon informs Frieza that a band of low-class Saiyans had taken over Kanassa in just a few days. Dodoria states that the job to take Kanassa had been in the pool for months and that not even Frieza's elite squadrons could take Kanassa so easily. Frieza, Zarbon and Dodoria contemplate the fate of the Saiyans due to the growing power of the species and decide to take action in order to avoid repercussions, as the Saiyans might pose a great threat to them in the future. Zarbon advises Frieza to eliminate the growing threat before it poses a greater problem. Dodoria and his elite fighters are ordered to eradicate Bardock and his teammates.

Bardock dismisses the visions he had and goes to join his team on Planet Meat, but soon discovers his friends are all dead. Bardock's team was massacred by Frieza's henchman Dodoria and his elites. He battles the ones responsible and defeats them all, but is easily overwhelmed by a single mouth blast from Dodoria. He is left severely injured, but manages to make it back to Planet Vegeta passing his son along the way who has been sent to Earth. Though Bardock attempts to convey the danger that they are all in to the other Saiyans, since he has now realized that Frieza is going to destroy them all, everyone laughs at his claim. However, the Saiyans are scared when Bardock yells at them for their disbelief, and Bardock alone begins one final assault against Frieza.

During the assault, he succeeds in killing many of Frieza's minor soldiers to such an extent that Frieza, witnessing Bardock's actions with barely contained fury, orders for Zarbon to prepare his hoverpod for liftoff. Zarbon expresses confusion on why Frieza would want to leave the ship, although Frieza then subtly threatens Zarbon for questioning his orders, with Zarbon, intimidated by his boss, promptly making preparations. Frieza then emerges as one of Frieza's soldiers puts Bardock into a headlock, with the soldier releasing him, only for Bardock to give a speech on how the Saiyans are free from the tyrant, and then sending the Final Spirit Cannon to Frieza himself in a bid to avenge all those killed in the tyrant's name (and in the Japanese version, voices an interest in taking over the Frieza Force). Bardock seems about to change the future via his actions. However, Frieza counters the attack with his Supernova, which kills Bardock, many of his own soldiers, and destroys Planet Vegeta itself, all while uttering a maniacal laugh. As he is dying, Bardock sees one more vision of the future: his son Kakarot facing Frieza. Being assured that Kakarot would be the one to kill Frieza, Bardock gives a small smile as he disintegrates along with the planet. As the planet is on the verge of blowing up, Frieza continues laughing at its destruction, as well as telling Dodoria and Zarbon to watch the "beautiful fireworks". After his demise, Bardock wishes his son, Kakarot, to take care. At the same moment, Kakarot, who is still in the space pod, wakes up.

Elsewhere, having just completed an assignment on a far-off world, Vegeta is informed of his homeworld's destruction. His pride keeps him from expressing his shock and he remains outwardly emotionless. Soon afterward, Kakarot's space pod touches down on Earth, where he is found by an elderly man named Gohan, and giggles happily in the old man's arms. Gohan then decides to care for the boy as his own grandson and renames him Goku. The film ends with a montage of Goku's many heroic deeds on Earth, leading to his battle with Frieza.

Bardock - The Father of Goku was released on March 19, 2003 as part of Dragon Box Z, Vol. 1 in Japan. It was re-released on August 5, 2011 as part of the Dragon Ball Z Special Selection along with The History of Trunks. This DVD had a higher video bitrate but a lower audio bitrate.

FUNimation released Bardock - The Father of Goku for VHS and DVD on January 31, 2001 in both edited and uncut forms.[1] As was the case with all previous releases, the special was released in an unformatted 4:3 aspect ratio. The DVD featured a new English dub with a soundtrack of American rock bands and a score done by Dale Kelly, Andy Baylor and Mark Akin. It premiered on Toonami on September 5, 2003, kicking off a month-long event called "DBZ Movies," during which a Dragon Ball Z feature aired every Friday. Bardock aired in an edited format and also included pieces from the Faulconer Productions score from Dragon Ball Z in some scenes when normally licensed music would have been heard on the DVD and VHS. This was likely done because FUNimation no longer had the licenses for some of the songs they had included in the soundtrack. This version of the special has never been released to home video.

FUNimation re-released Bardock - The Father of Goku and The History of Trunks on DVD and Blu-ray on February 19, 2008 as part of their "Double Feature" line.[2] This new set featured a brand-new widescreen transfer from Video Post & Transfer and a new audio mix for the English dub featuring the original Japanese score done by Shunsuke Kikuchi in addition to the old mix featuring the American rock bands and the Kelly/Baylor/Akin score. FUNimation also released each Double Feature DVD individually on September 15, 2009, but both went out of print soon after.[3]