Group study in the Douglass Library

■ Expansive green lawns, tree-lined paths, and Georgian Colonial architecture give the Douglass Campus its quiet charm. It is a campus with deep traditions that focus on supporting women’s success and addressing pressing global humanitarian issues.

The campus is home to Douglass Residential College, a challenging and supportive collegiate environment for young women interested in fostering their leadership skills. It is also where you will find many academic departments in the School of Arts and Sciences and the Mason Gross School of the Arts, the nationally prominent Eagleton Institute of Politics, the Institute for Women’s Leadership, Nicholas Music Center, and Levin Theater.

■ With 142 acres of woods and lawns, the George H. Cook Campus is known for its wide-open green spaces, the most famous being the lawn at Passion Puddle. The campus is home to the School of Environmental and Biological Sciences, which has its own faculty, state-of-the art laboratories, and a research farm. The school is a premier research center for studying the sciences, technology, business, the environment, and food, nutrition, and health.

The George H. Cook Campus is a vibrant academic oasis with abundant opportunities for undergraduate students to get involved in exploring the world around them. Through hands-on research on campus, internships with partners in industry, and growing study abroad opportunities, students learn to solve problems facing the world today. Our programs prepare students for professional schools (medical, dental, veterinary medicine, and law), graduate study, industry, business, and health-related fields. 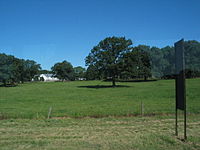 One of Cook College Fields

The School of Environmental and Biological Sciences (SEBS) is a constituent school within Rutgers, The State University of New Jersey's flagship New Brunswick-Piscataway campus. Formerly known as Cook College—which was named for George Hammell Cook, a professor at Rutgers in the 19th Century—it was founded as the Rutgers Scientific School and later College of Agriculture after Rutgers was named New Jersey's land-grant college under the Morrill Act of 1862. Today, unlike the other arts and sciences schools at Rutgers, the School of Environmental and Biological Sciences specializes in environmental science, animal science and other life sciences. Although physically attached to the New Brunswick-Piscataway campus, most of the SEBS campus lies in North Brunswick, New Jersey.

The School of Environmental and Biological Sciences is also home to the New Jersey Agriculture Experiment Station and the Rutgers Gardens, a 50-acre (200,000 m2) botanical garden.

Originally called New Jersey College of Agriculture, the name was changed in 1965 to the College of Agriculture and Environmental Sciences and was again changed in 1975 to Cook College. It was also at this time that Cook College became residential with the building of the Newell Apartments. In 2007 it was again renamed as the School of Environmental and Biological Sciences as part of a larger reorganization of the university.

Martin Hall on Cook Campus was the location of Nobel Prize winner Selman Waksman's research in soil microbes. It was here that Waksman and his colleagues are credited with isolating several antibiotics most notably streptomycin which was used successfully against diseases such as tuberculosis.

The SEBS Governing Council (SGC) currently serves as the student government for the School of Environmental and Biological Sciences. The council is composed of student representatives from every major, a number proportionate to the number of students in that major, as well as Class Representatives, University Senators and RUSA Representatives.

The council was established as the Cook College Council (CCC) in 1974, and was later renamed the SEBS-Cook Council (SCC) in 2006 with the renaming of the school. Beginning with 2010-2011 academic year, Rutgers University merged all the student councils into an elected Rutgers University Student Assembly (RUSA), but the professional schools remained separate councils. The SEBS Governing Council fulfills this role.

The Recreation Activities Crew (formerly known as Recreation Advisory Council and known as RAC on the Cook Campus) is an organization that is composed of student volunteers and meets weekly. The mission of this group is to get students involved with community events both within Rutgers University and with the city of New Brunswick. They have put together events like Special Friends Day, Price is right, Deal or No Deal, Trivia Bowl and other small events. Special Friends Day is one of the biggest community events that the Recreation Advisory Council hosts. Volunteers set up the Cook/Douglass Recreation Center into a themed place. Their parents get a day off from taking care of them and allows them to spend some alone time. Also the students that volunteer get a unique and special experience that will last a lifetime. Each year, the theme is different. The most recent theme (March, 2009) was Board Games. Each year, hundreds of hours of student time are poured into creating this one special day. The Special Friends Day past themes include—2008: Disney: 2007; Heroes.

Started in 1906, "Ag Field Day" began as a way for farmers to learn about the NJ Agricultural Experiment Station's studies. It expanded to lectures, demonstrations and tours in 1917, and was later embraced by students as a party focal-point. By the mid-90s, university administration scaled back the evening party atmosphere to decrease attendance by non-students and curb underage drinking. The event's daytime activities continue unabated, and are open to all.

Since 2009, Ag Field Day has been coincident with the university-wide Rutgers Day.

1862 - Morrill Act passed -- provided grants of federal lands to states and territories agreeing to establish a public institution for teaching of agriculture and mechanical arts.

1864 - Rutgers College named land-grant college with departments in agriculture, engineering, and chemistry. Rutgers was in competition with Princeton and state Normal School at Trenton. George H. Cook led the fight to have Rutgers named as the land-grant college.

1911 - Jacob Lipman succeeds Dr. Edward B. Voorhees as director of the experiment station.
Lipman becomes first dean of agriculture in 1915, serves until 1939.

1912 - The Cook family farm on Ryders Lane was purchased.
A fireproof horse barn is built on College Farm.

1914 - Smith-Lever Act is passed -- established the Cooperative Extension Service at each land-grant institution.

1924 – Rutgers College assumes the name of Rutgers University. The College of Agriculture remains a distinct unit.

1929 - Frank Helyar was made director of resident instruction, served in that capacity until 1953.

1933-35 - Civilian Conservation Camp (CCC) was built and opened on College Farm Road, on the site of the existing Bioresource Engineering Campus. Many of the existing wooden buildings were part of that complex.

1936 - The Log Cabin was built by WPA labor (an FDR era welfare program). Plans were brought from Maine by William Martin -- a Maine fishing lodge.

1963 -- Five hundred acres of federal land at the former Camp Kilmer was given to Rutgers. The idea of the federated college system was born -- a number of “multipurpose” liberal arts colleges would comprise Rutgers’ undergraduate teaching system in New Brunswick. The Rutgers College of Arts and Science, Douglass College, and University Colleges already existed. The university proposed a new college, Livingston College, emphasizing people and their urban environments on the Kilmer site in Piscataway, plus two other future colleges.

1964 - The Green Print is first published as the official news magazine of the College of Agriculture, producing four issues per year. In 1973 it became the official Cook College newspaper and begins publishing weekly.

1965-1981 - The Federated College System: There were now five colleges in the federated system, Rutgers, Douglass, Livingston, Cook, and University Colleges.

1971 - Dr. Mason Gross stepped down as president, and
Dr. Edward Bloustein was named the new president. Dean Charles Hess, Dick Merritt and John Gerwig from C.A.E.S. met with the new president before he ever arrived on campus to discuss the new Cook College. Cook College was approved by the Provost’s cabinet and the President’s cabinet on November 8, 1971, and by the Board of Governors on November 19, 1971.

1972 - Dr. Charles Hess is selected as the first dean of Cook College.
Richard Merritt continues as director of resident instruction and associate dean; plus for 1973-74 dean of operations; and 1974 named as dean of instruction.

1973 - The first class of Cook College students matriculated in the fall.
New departments in human ecology and social science, and the humanities and communications were added to the college.

1976 - “Save the Puddle” campaign -- Students initiated a campaign to restore the eroding shore-line of Passion Puddle -- raised $75,000 that was used to drain, re-contour the shoreline, and place rip-rap along the embankments. In the long run, it was not a successful solution.

1986 - Official title of the “Dean” changed from Dean and Director to Executive Dean for Agriculture and Natural Resources, Executive Director of NJAES and Dean of Cook College.”

This timeline is a work in progress. Additions or corrections are requested. Contact:
Roy H. DeBoer
[email protected]
Fax: 1-732-932-1940

© Rutgers, The State University of New Jersey. All rights reserved.

Rubber finger tips near me

Funny candles for him