In today’s attention economy, platforms are megaphones and audiences are income. Shut off the megaphone and the income goes away. Bad guy go bye-bye. Throughout the last year, Twitter, Facebook, YouTube, and beyond have reckoned with their social responsibility not to amplify and monetize hate in what has become known as “the great deplatforming.” But what about when the megaphone is off and the cash keeps flowing in?

Earlier this week on DLive, white supremacist Patrick Casey played Sekiro: Shadows Die Twice for 350 live viewers. On the bottom of the videofeed, a link to Casey’s StreamElements account was highlighted in yellow.

“They are in a real sense their own kind of platforms.”

Casey was previously the leader of Identity Evropa, a group the Southern Poverty Law Center calls a “white nationalist organization” that later rebranded itself as the American Identity Movement before dissolving last fall. Now he is associated with the Groyper Army, which the Anti-Defamation League calls a white supremacist group. Twitter banned Casey in 2019, and TikTok followed suit late last month. PayPal has banned him too. But on StreamElements, through Casey’s “tip” page, fans can pay a couple of dollars to share a message onscreen with his viewers. As an added draw, Casey’s DLive stream title notes, “SE: TTS + Song Requests,” prompting viewers to donate money and add a song to the stream music queue. They’re not just funneling money to a known white nationalist, they’re cultivating a space, a vibe, a community.

Early on in Twitch’s life, streamers could monetize their viewers in one of two ways: subscriptions to their livestreams or advertisements. Around 2012, streamers began soliciting donations to their PayPal accounts—three percent of which PayPal pocketed. A year later, third-party companies (one of which would later become Streamlabs, acquired by Logitech in 2019) began developing tip jars for Twitch streamers, which viewers could access on a given channel’s “About” page. In 2017, Streamlabs founder Mike Le claimed that between 2015 and 2016, tipping volume increased from $43.6 million to $80.2 million on the platform.

Unlike a recorded YouTube video, Twitch streams benefited from the novel idea that you, a rando, could interact live with a semi-famous gamer. Streamers realized that in order to keep people coming back they couldn’t simply rely on content, they had to architect communities out of their Twitch.tv pages. That meant reading through the scrolling live chat to the right of their videofeeds and reacting to absurd, hilarious, and kind messages from fans. Streamlabs fit neatly into this model by offering a sure way to grab streamers’ attention: money. Viewers donated $5 tips alongside questions, comments, or insults, often automatically read out loud by a computer voice. In 2016 StreamElements would come along offering similar services; it raised $11.3 million in 2019.

A streamer could just post a link to their PayPal or shout-out their Venmo every now and then to scrape together an income. But that would look more like busking than the back-and-forth conversations that fomented countless parasocial relationships through Twitch. Streamlabs and StreamElements stuck because of their social dimension. “It’s the package itself that gives the money meaning,” says Lana Swartz, University of Virginia media studies professor and author of New Money: How Payment Became Social Media. “Without the meaningful dimension, it’s possible many people wouldn’t be inspired to give money and get that immediate reaction and gratification.”

Sometimes those messages were as simple as “Love your T-shirt.” It is, however, the internet, and kindness isn’t as easily monetized as hate. Twitch viewers have a long tradition of sending messages to streamers intended to get a rise out of them. In Twitch’s early days, some streamers assumed a dunk-tank approach to monetizing their game streams, reading out loud insults littered with expletives and slurs and reacting for the audience. Please drink bleach, love, WomanH8r666. Others simply laughed as the abuse waterfalled in. In 2014, Steven “Destiny” Bonnell received birthday messages littered with homophobic slurs and anti-Semitic comments. Since that time, more streamers have taken to banning certain words from tip alerts with the services’ profanity filters.

Unlike PayPal, Streamlabs and StreamElements aren’t just moving money, and neither takes a cut of donations. They are instead considered “donation management services,” says Will Partin, an analyst for Data & Society, a nonprofit research institute. “But they are in a real sense their own kind of platforms,” he says, due to their social element. “If a platform is software that connects parties—in this case, viewers and streamers—that is what the essence of their business is.”

Like most social media platforms, StreamElements has a moderation team that reviews reports about user agreement violations. The company also proactively checks streamers who are widely known to violate StreamElements' terms of service, although Casey's account apparently did not raise any flags.

Although PayPal is more of a cut-and-dried payment processor, it does have a clearer history of “moderating” its users when they “act in a manner that is defamatory, trade libelous, threatening or harassing,” as its user agreement reads. PayPal in 2010 froze WikiLeaks’ account, citing a violation of its Acceptable Use Policy. By that time, WikiLeaks had received hundreds of thousands of dollars through PayPal. The company alleged that WikiLeaks was used to “encourage, promote, facilitate or instruct others to engage in illegal activity.” Microsoft principal researcher Tarleton Gillespie recalls the decision as among the first very public instances of a payment service dropping a big-name site.

In 2017, PayPal refused to service Identity Evropa (Patrick Casey’s group), as well as 33 other far-right or white supremacist groups following the Charlottesville Unite the Right ralley, The Washington Postreported. At the time, PayPal said its “highly trained team of experts addresses each case individually and carefully evaluates the website itself, any associated organizations, and their adherence to our policy.”

“Ten years ago, it was much easier for payment services (and web hosting companies and cloud computing services) to look the other way, and to claim a position of neutrality,” says Gillespie. Increasingly, he says, payment services are willing and ready to slam the ban hammer down on users who may not be doing something illegal but “are crossing other lines that have more commonly been policed by the social media companies, like hate speech.”

Despite their similarities to social media, payment processors and donation management services don’t seem to actively seek out and remove bad actors from their money streams. As Tim Gionet, also known as BakedAlaska, livestreamed himself storming the Capitol early January on DLive, donations poured in from his StreamElements account. The tips steadily rolled up the screen: $3.33 “PATRIOTS ARE IN CONTROL,” $3.33 ”seventeen seventy six will commence again.” StreamElements removed BakedAlaska’s account after WIRED reached out for comment in early January. (StreamElements noted in an email this week that it would review any accounts WIRED wanted to bring to its attention, and it removed Casey’s after we reached out for comment.) Shortly before a February 2019 report by the white-supremacy-tracker Angry White Men, Streamlabs removed several accounts operated by far-right figureheads, including Richard Spencer and Nick Fuentes. The Heel Turn Network, which regularly featured Spencer alongside other white nationalist figures, received $874.16 that month from its top 10 donors alone.

A spot check earlier this week confirmed that dozens of Streamlabs and StreamElements accounts attached to white supremacist, far-right, or conspiracy theorist content are still live. StreamElements does not display donation amounts, but leading conspiracy theorists and far-right figures have received hundreds of dollars a month through Streamlabs from just their top 10 donors, according to public data from the company. Smaller donations make up the majority of these tips, though, and it is impossible to quantify how much money they receive in total through Streamlabs.

Social media organizations are increasingly confident in rooting out segments of their communities that condone or spread hate. But social media is bigger than the intention to connect people over videos, articles, and ideas. Now money is content, and its transfer is social. Until payment platforms take the same degree of responsibility as their more traditional peers, the rot at the heart of the internet will not only persist, it’ll turn a profit.

UPDATE 2/4/21 4:55PM ET: This story has been updated with additional details about StreamElements' moderation policies.

A number of online creators and influencers have adopted mobile-friendly “link in bio” websites, like Linktree, to point their fans to their social profiles or other content they want to promote. Today, live streaming software company Streamlabs launched its own product in this market with its new mobile website builder Willow. Its tool differentiates itself from others in this space by integrating a tipping feature directly on the landing page.

“Link in bio” websites have grown in popularity because social platforms like TikTok and Instagram only allow users to feature one main URL on user profiles. But online creators and influencers often have a presence on multiple sites they want their fans to know about. That’s where these custom websites come in.

The product itself is somewhat basic compared to those being offered by newer startups — like Beacons, for example, which lets users add links for donations, affiliate shopping, paid downloads and more. In Willow’s case, you just enter a URL and it appears on your website. You can also pick from a handful of colorful designs, each with their own style and font.

The online website builder lets you view your site in progress as you add links or update the design, and you can preview how it looks on mobile, tablet and desktop by clicking a button.

But Willow’s more interesting feature is the ability to add tipping to your website.

To do so, you’ll just toggle on the Tips feature from the website builder interface and then connect your PayPal account to Willow. This places a “Donate!” button at the top of your link list, so you can encourage fans to leave a tip.

This feature will be the new website builder’s key selling point, given that today, creators who receive tips through social and streaming platforms often have to share the revenue from those transactions back with the platform itself. Tips through PayPal will be a more direct form of payment between fans and creators, beyond any applicable PayPal fees.

Streamlabs tells us it doesn’t keep any of the tip money — everything goes to the creator.

However, it does plan to soon monetize the new product in a different way. In a few weeks’ time, the company will introduce a paid version for $5 per month that will include enhanced analytics like click-through rates and which days see the most clicks and views. The pro version will also include more custom themes. 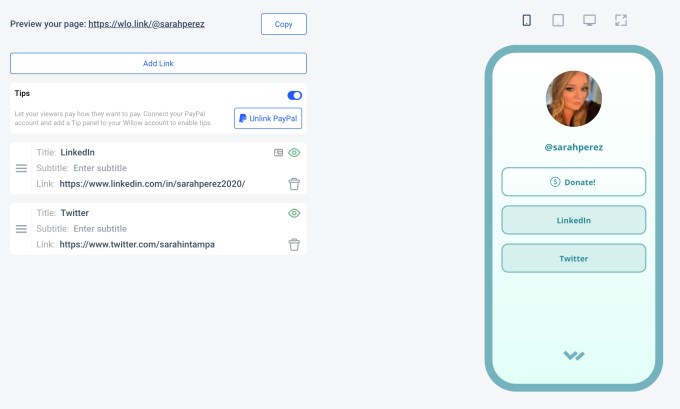 Because Willow only launched today, it doesn’t have a large number of users at this time. However, a top streamer FaZe Mew has already signed up, per the short Willow link (wlo.link) found on his various social media bios.