Bored at Home Quarantine? Watch 'The Chosen' for Free on VidAngel

Tens of millions of people across the globe are shuttered in their homes in an effort to contain the deadly coronavirus pandemic.

VidAngel, a digital streaming service that produces wholesome filtered content, is working to make quarantine a little brighter by making everything on their site completely free until March 30.

"We understand how strapped working parents are right now trying to juggle kids at home and work from home, and we also know from personal experience how being away from school and not seeing their friends is a real challenge for all of our kids. That's why we're making VidAngel completely free for the next two weeks," said Neal Harmon, CEO of VidAngel.

Families will now be able to watch content like VidAngel's award-winning series about Jesus' life called The Chosen. They will also get to share a couple of laughs by watching Dry Bar Comedy, a clean standup comedy series.

"We hope free access to our award-winning content, which is both entertaining and educational, will come as a welcome relief in the face of the stress of the pandemic. The VidAngel family, just like your own, has an opportunity to pitch in and do whatever we can to help our communities weather this crisis. We hope that in some small way this will help," Harmon.

VidAngel's only request is that everyone using the platform agrees to practice social distancing during this global outbreak.

Existing subscribers are also eligible to enjoy the free content.

The Chosen is a television drama based on the life of Jesus of Nazareth, created, directed and co-written by American filmmaker Dallas Jenkins. It is the first multi-season series about the life of Jesus, and season one was the highest crowd-funded TV series or film project of all time.[1][2] The series' creators stated that they had hoped to distinguish the new series from previous portrayals of Jesus by crafting a multi-season, episode-based story.[3] The series portrays Jesus "through the eyes of those who met him".[4] In addition to VidAngel and its own app, the series airs on several streaming services.

The Chosen is a multi-season television drama about Jesus Christ. Series creator Dallas Jenkins wanted to create a series about Jesus that could be "binge watched."[4] Jenkins' intention was not only to dig deeper into the people who encountered Jesus and to see Jesus through the eyes of those who met him, but also to show him in a way that is more "personal, intimate, immediate."[4][1]

The first season introduces Jesus and the calling of his initial disciples. The second season focuses on the beginning of his public ministry and what happens as word of his ministry begins to spread.[5]

The 12 disciples in The Chosen

Although the show has an evangelical tendency,[8] there are consultants from three faith traditions providing input. Acting as consultants are Messianicrabbi Jason Sobel from Fusion Global Ministries, Catholic priest and national director of Family Theater Productions Father David Guffey, and professor of New Testament at Biola University Dr. Doug Huffman. They review scripts and provide facts or context on the biblical, cultural, and socio-political history of the storyline.[9][10]

The show features many people of color as actors, which is not often the case in television and film based on the Bible.[11][1]

The opening credits of the first episode include the following:

The Chosen is based on the true stories of the gospels of Jesus Christ. Some locations and timelines have been combined or condensed. Backstories and some characters or dialogue have been added.

However, all biblical and historical context and any artistic imagination are designed to support the truth and intention of the Scriptures. Viewers are encouraged to read the gospels.

The original names, locations and phrases have been transliterated into English for anything spoken.[12] 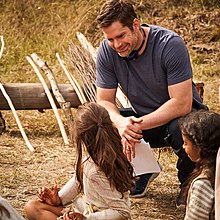 The Chosen is based on The Shepherd, a short film Jenkins made for a Christmas Eve service at Harvest Bible Chapel in Elgin, Illinois, U.S., filming it on a friend's farm in Marengo.[1] The film got the attention of the faith-based filtering service VidAngel, which was embroiled in a copyright infringement lawsuit with major Hollywood studios and thus seeking original content to distribute.[13] VidAngel suggested putting the short film on Facebook as a concept pilot to generate interest for Jenkins' idea of a multi-season series. The short film received over 15 million views around the world.[3][14]

To create The Chosen, Jenkins partnered with video marketing strategist Derral Eves, with Eves as executive producer.[15] VidAngel, along with Eves and Jenkins, turned to crowdfunding to raise money to produce the first season, utilizing a provision of the JOBS Act of 2016 which allows companies to use equity crowdfunding to offer a share of ownership and profits from the company to online investors, rather than the arbitrary "perks" offered by regular crowdfunding.[14] At the end of the first fundraising round in January 2019, the project had raised over $10.2 million from over 16,000 investors, surpassing Mystery Science Theater 3000 as the top crowdfunded filmed project. Each investor received equity in the show and is regulated by the US Securities and Exchange Commission (SEC).[4][11]

The makers of the series have expressed that they desire for The Chosen to be seen by over one billion people in every country in the world.[17][2]

Season 1 was filmed over 60 days in Weatherford, Texas, and used the existing Capernaum Village, which offers film set rental and live experiences for tourists, to recreate the historical Capernaum. The filming was supplemented by a sound stage and visual effects.[18]

Season 2 moved filming to Utah's version of ancient Israel in Goshen, Utah County, where The Church of Jesus Christ of Latter-day Saints built a replica Jerusalem movie set to film scenes for their Bible and Book of Mormon videos.[19] This marks the first time a production not affiliated with the LDS church has been granted access to film on this set.[20]

Season 2 was filmed during the COVID-19 pandemic, creating challenges for film production. 2,000 extras were used to film the Sermon on the Mount scene, all of whom were required to obtain a negative PCR test prior to filming. Following COVID-19 protocols cost the production of season 2 an additional $750,000.[21]

The first season was distributed on its own mobile app free around the world, as well as the VidAngel streaming platform in the United States.[17] In March and April 2020, in response to the COVID-19pandemic, the first season of The Chosen was made available completely free with no restrictions through its app.[1][3]

Following the release through its own app, season 1 began airing on BYUtv in late 2020.[15] By early 2021, broadcast had extended to other Christian and family oriented networks such as Trinity Broadcasting Network and UPtv, as well as NBC's Peacock streaming service.[22][23]

On March 16, 2021, Dallas Jenkins, the series creator, announced that the release date for the first episode of season 2 would be Easter Sunday, April 4, 2021, with a target of releasing one episode per week after that.[24][25]

The series' success is attributed to artistic storytelling and cultural relevance, while staying true to the message of the gospels.[5] Writing in Film Threat, Alan Ng called the series "smart and insightful to a contemporary audience."[26]

During the COVID-19 shutdown, many people downloaded and binge-watched an eight-episode television series called "The Chosen," about the life of Jesus Christ.

"The Chosen" is the first-ever multi-season TV show about the life of Jesus. Created outside of the Hollywood system, the series allows us to see Him through the eyes of those who knew Him.

Season 1 was funded entirely by private donations, making it the number-one Crowd-Funded media project of all time, with donations of more than ten million dollars, and distributed through Vid-Angel productions.

In it, Bible characters come to life. Writer and director Dallas Jenkins explains the thinking behind the name of the series.

"We look at and use the term for Christ as the 'Chosen One.' So, it refers to Christ in many ways. The Jews are God's chosen people. Even as an Evangelical, I believe that. And the people that Christ chose to follow Him and be on his team – as we like to say – it's a little bit of a nod to that.

You might say telling Bible stories is in Dallas Jenkins' blood. His father, Jerry, is co-author of the popular Left Behind book series.

He told us producing a television series about the life of Christ is much different than many of the films we see that try to capture His life and earthly ministry.

"When you do a movie about the life of Christ, you've got 90 to 120 minutes to try to cover a lot of ground," Jenkins said. "So, oftentimes it goes from miracle to miracle. Bible story to Bible story. Jesus is typically the main character. So, you are just seeing things through His eyes and you're encountering people for a very brief amount of time."

"The Chosen" is different. In a multi-season show, the creators were able to develop the characters and expand on the Bible narrative while keeping to the spirit of the text.

"We are able to really explore in-depth, these people," Jenkins said.

Jonathan Roumie plays the role of Jesus in the series. It's a role he calls "life-changing."

"It's humbling. It's overwhelming. It's inspiring. It's faith inducing," Roumie said. "Faith strengthening. It's kind of indescribable," he added

It's also different, Roumie told us, because The Chosen shows sides of Jesus' ministry that have never been depicted on film before.

The day CBN News visited the set, the crew was getting ready to film an episode on the Wedding at Cana, the first miracle Jesus performed.

"We're exploring what it is like to be at a first-century wedding. What it might have been like to have Jesus as a guest at a wedding," Roumie said. "It's a very joyous occasion. And again, one I can scarcely recollect having seen put to film before."

Roumie also told us about playing Jesus in a way that expresses is humanity – something people tend to forget about, or have trouble imagining.

"He felt the things that we feel. He experienced loss and sadness, frustration, and happiness, joy, and all those things. Temptation, but without conceding to that," Roumie observed.

Was it intimidating to play Jesus?

"Oh, yeah," Roumie said. "Anybody that says otherwise is either not familiar with who Christ is, was, or will be. Or they're letting their ego answer that question."

To prepare to play Jesus, Roumie said he prays a lot, reads, and goes to church. But mostly, he said, it's prayer that he turns to in order to play the role of the Son of God.

We asked director Dallas Jenkins what it's like to take the pages of scripture and bring them to life.

The creators of "The Chosen" are now working on Season Two. To view all eight episodes of Season One, click HERE for information on how to download it at no charge.

STAY UP TO DATE WITH THE FREE CBN NEWS APP!
Click Here Get the App with Special Alerts on Breaking News and Live Events!

Sours: https://www1.cbn.com/cbnnews/us/2020/june/first-original-tv-series-about-jesus-christ-takes-off-during-covid-19-shutdown
Jed Madela chosen as the OPM representative by the NCCA

Funny candles for him